The impressive mule living with us is aptly named Chief. As “Head Honcho” of our ranch, he exudes unwavering power and strength. When he moved in with us 6 months ago, it was evident he had never been taught proper manners, but mules are unnervingly intuitive and Chief is a very quick study. His bull-in-the-china-closet approach is turning into something akin to the delicacy of a highly trained Kabuki dancer.

His enormous head is analogous to a wrecking ball. He swings it about powerfully from the pivotal point of his shoulders which branch into thick legs with flinty hooves rooted solidly to the ground. Comparable to a sumo wrestler, there is ritual in his disciplined movements. Thigh slap, stomp, suck air, stare, grimace, swing the wrecking ball head. Everything within the radius of his neck topples. 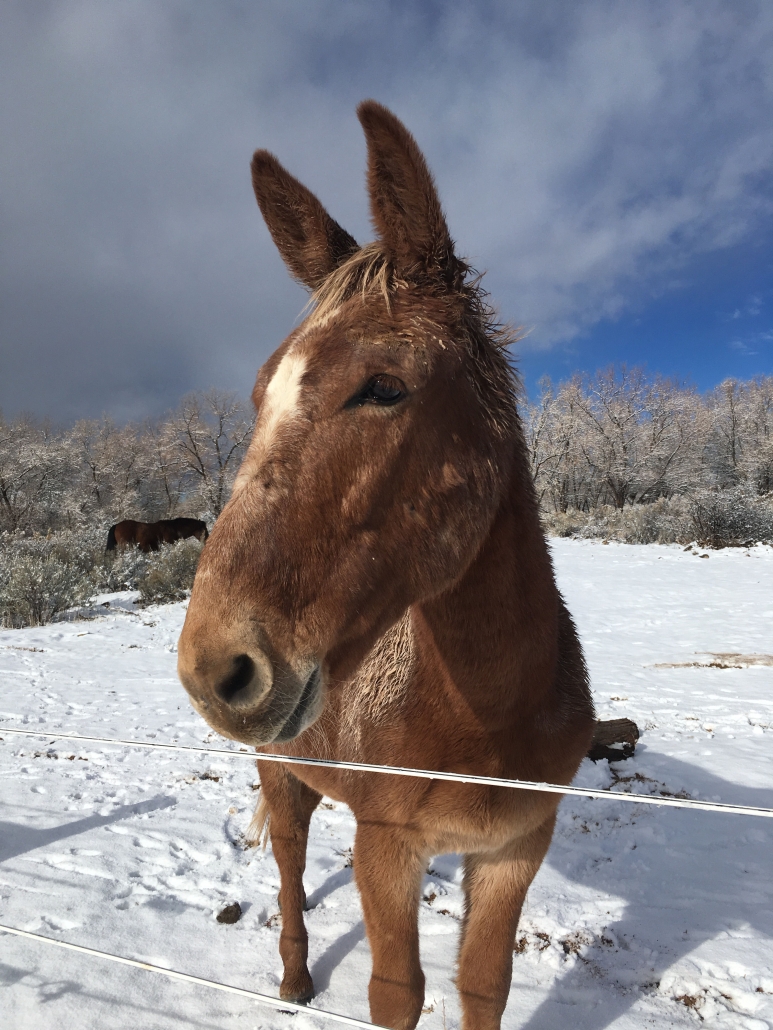 His physical strength is obvious, but his hidden heart is even bigger evidenced by eyes that shine with curious luminosity. When he catches me studying him, they glaze over with a closed dullness. Human intimacy shutters him down and he guards his heart with a combination of aloof shyness and abrasive bravado. We surmise he has never felt a soft touch or heard a whispered word from an engaged human partner. The colossal fellow is in cautious wonderment of his new home.

I fantasize that he has a crush on me. He approaches, becomes unsure, then veers away as I reach out. With precision he brushes slightly against my coat, marching past with a no-nonsense stride to stand just out of reach. That unequivocal coat-brush was an accident, he says, standing shock still with his eye arching over the rump pointing in my direction. We both feel into the space between. I try it again the next day, and the next, until months have passed. The coat-brush trick is now deliberate and the businesslike stride has become a languid slowness. He walks in a coltish knock-kneed fashion which is bizarrely deceptive of his break-neck speed and razor sharp reflexes.

One week ago, I had a talk with Chief. We were standing side by side (but not too close!) breathing in the magical beauty of our home. I opened my heart/mind to him,

“Chief you are home. You will never be passed onto another human. You are devastatingly handsome. Your power and strength is awe inspiring. We respect you. Your job, should you choose to accept it, is to be the ranch guardian. You are the Chief here.”

The massive fellow looked me straight in the eye. Then trotting off to the fence, he ran the entire property perimeter, stopping at strategic points to survey the vistas with his head majestically arched over the fence. His newly granted domain was paced off with deliberate intention as I watched with some disbelief. He returned to stand beside me on the ridge, staring intently into the dense sagebrush where the many other land residents keep their dens and nests.

Every day since, he trots the fence line, then stands on the volcanic ridge to scan his kingdom. His work ethic is impeccable. He has lost some weight and is slicking out into a burnished copper sorrel. He is noble and gorgeous. When I approach to praise him for fulfilling his sentinel duties that are innately embedded in his character, even a cretin would see that he is annoyed by my fawning manner. I have much to learn from him.

A dear friend from London came to stay with us. Lynn is a 6 foot tall, regal Englishwoman who commands any room she enters. Chief met her at the gate as we were trying to leave one morning, his barrel chest firmly pressed against the bars. A 1200 lb. mule is nothing any intelligent human would want to muscle around, and he moved on when he was “damn well good and ready”. Before pushing off, he gave Lynn one of his signature looks that burns through the soul.

“Bloody hell, I’ve never felt so intimidated in my entire life! That bloke has a massive presence!” said the elegant Brit when she regained her composure.

Yes, he has a certain bulldozer “je ne sais quoi”, yet his splendid aura is dwarfed by an even grander heart. The intimidation we have all felt from Chief is our natural fear of encountering a sentient being with a titanic emanation that comes in the form of a large mule. It has taken time, but Paul and I trust the guy implicitly. Chief is home, and he is unquestionably THE Chief.