Lessons from a Weaver Bird

When I was young, my family moved to South Africa from Colorado. My canine companion, Smoky, and I spent freedom-drenched afternoons exploring our new, wild environs. A meandering brown river on the high veld was our new playground. Large, flat rocks mid-river provided the perfect perch from where we watched the weaver birds sorting out their mating dramas in the thickets fringing the banks.

Weaver birds build the most elaborate nests in the world. The male’s fashion fine homes using strands of leaf fibers they painstakingly weave together. Their bright plumage and ability to construct nests shaped like upside-down bottles are what attracts the prospective female mate. These nests sway collectively in the wind, like a myriad of wind chimes.

One male, resplendent in his yellow plumage, was robust and confident, proud to be building his elaborate nest with great panache. His ladylove was a coquette, exacting and demanding. She would callously find a minuscule detail that was sub-par with each of his proud presentations. With every rejection, he lost some of his jaunty demeanor, some of his golden gilt, some of his soul.
I watched this saga unfold with increasing alarm. After the fourth nest had been rejected, our vibrant male had become gaunt and grim. His magnificent plumage was dull, his song non-existent and his manner increasingly maddened.

I watched his fifth attempt at nest building with bated breath. Our worn and tattered bird made his bedraggled nest in a crazed manner and the haphazard protrusions of grasses and sticks wafted to the ground in the breeze. He was coming undone, but he finished with sheer will and instinctual determination. Before the female could inspect, he went berserk. He demolished his own nest with whirling wings and throaty distress calls. 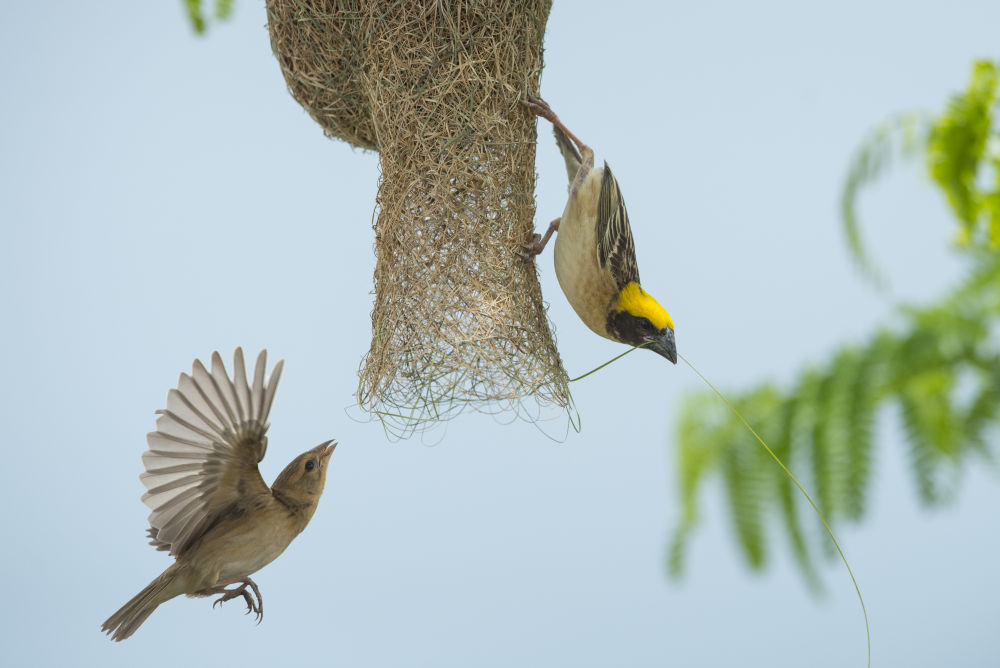 After the crazed wreckage, he exhaustedly extended his shivering wing tips to the rough tree bark. The feather-light touch of his wings was akin to guy wires holding down a fragile tent. He shook uncontrollably for timeless moments as his throat and chest feathers beat with a dangerously high rapidity. His seizure eventually calmed and our frail little bird with dull eyes, sunk his head into his breast.

Smoky and I left this terrible scene at dusk and I felt we might never see our yellow bird again.

Next day, there he was, fragile but somewhat recovered. He had only enough energy for one more nest, and he built it with precise deliberation. This was his supreme oeuvre d’art, perfectly oval and steadily crafted with the eye of a master.

He didn’t have the energy to fetch his mate, but it was not needed as she came to him of her own volition. She accepted this nest.
On our subsequent forays down to the river, I saw our Weaver male once again resplendent in his sunny yellow plumage. He was no longer feverish and crazed in his actions. He was the epitome of strength and hard-earned resilience.

The highlighted portion of this story illustrates what can happen in a session with a horse. The release of trauma can sometimes be acute, precise and perfect.