On March 2016, three wild Navajo foals were transported to an equine rescue facility, Horse Protection League (HPL) in Golden, Colorado. The babies came from a herd of 20 horses enduring dire conditions from a reservation near Four Corners, in southwestern Colorado.

These foals were wild horses and had never been in contact with humans. They huddled together in the corner of the trailer with terrified eyes. The smallest baby, and his much larger sister, were protected by the grey grulla who put himself between the two bay siblings and the volunteers.

In honor of their Native American heritage, they were given Navajo names. Nina—”strong”—went to the largest bay filly. Wyatt—”brave”— appropriately went to the protective grulla. Finally, Geronimo—”sacred”— was bestowed upon Nina’s brother, the smallest of them all.

Wyatt was adopted immediately. Nina was next. Geronimo with his fiery personality and small size, was less adoptable. He lingered at the rescue facility.

I was volunteering as an Equine Massage Therapist at HPL, and met young Geronimo who was penned next to two female burros. They were his entire emotional world; his herd, his safety net, his touchstone. He spent hours hanging his head over the dividing rails into their pen, hoping for his new friends to sidle up so he could nuzzle one of them. When I showed up, he was wary and would only let me scratch his withers, as he simultaneously muzzle-nosed a burro next door. He always needed another equine close to him. 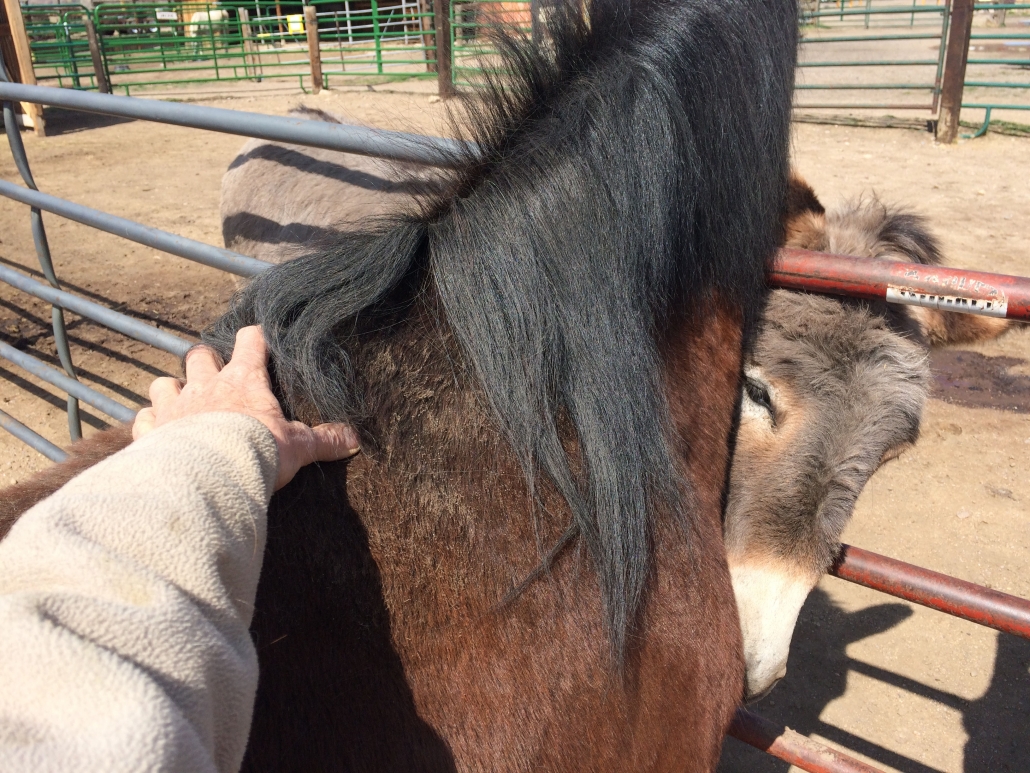 I fell head-over-heels in love with his velvet nose, luminous eyes and delicate bone structure. But he was not affectionate or seemingly interested in me. He gained the reputation of a “nipper” and kicker and it seemed he would stay indefinitely at HPL.

In April 2018, I impetuously adopted him. I did not have a place for him to go, so he went to my friend’s small acreage in Loveland. She had a young rescue gelding, and Geronimo had an instant friend. I trusted the process and our path together.

My husband and I were building a home south of Grand Junction, and I knew he would eventually join us there, but when? In an unexpected flurry of construction, our home was miraculously done and the property fenced, but it was imperative that Geronimo has an equine partner. Within a month, another fortuitous piece of this complex puzzle fit into the unfolding saga….an unwanted mule, Chief, fell into our laps, October 17, 2018. We immediately organized for Geronimo to arrive one day later.

When Geronimo arrived he pranced out of the trailer, tail high and fire in his eye. He looked straight at me in recognition. I led him to the enclosed corral where Chief stood watching. With great panache, Geronimo sashayed in, squealing and striking the ground repeatedly with his left forelimb. Chief tried to approach, but Geronimo’s hind leg kicks were perfectly executed warnings. It was quite the show.

Chief persisted in his curious and stoic way. Geronimo continued to squeal, strike and kick with a colorful flurry, but within an hour the two were side by side in comfortable ease.

Five months later they are bonded blood-brothers. Chief, twice Geronimo’s size, lets him dominate at feeding time. After all, Geronimo was starved as a baby and his natural survival instincts were indelibly imprinted at an impressionable age.

However, roaming on their 35 acre home, Chief leads the way. Geronimo follows him like a baby brother. As Chief picks his way across volcanic outcrops, cactus patches, and ravines, “little G” is following one step behind.

The fire in our Navajo pony has been channelled from defensive biting to showy prancing. We call him “our little prince”, and he is a dandy. He is home, we are home, and Chief anchors us all with his massive presence. More on Chief later……