Schnuffle, from the German word “schnuffeln”.
A verb meaning to sniffle, to pry, to rummage.

Chief, our mule, is a Master Schnuffler. He schnuffles locked gates, closed barn doors, and delicate car side-mirrors; he schnuffles everywhere he should not schnuffle. But his favorite schnuffling site is on the top of my 91 year old mother’s head. Her name is Margaret and she is the right height for him, her hair is silvery-soft, and he likes her. Mule mucus and bits of green grass glued to her coiffure are his gifts of adoration. She loves everything about Chief, but most of all, his schnuffling. She also listens to what he has to say. 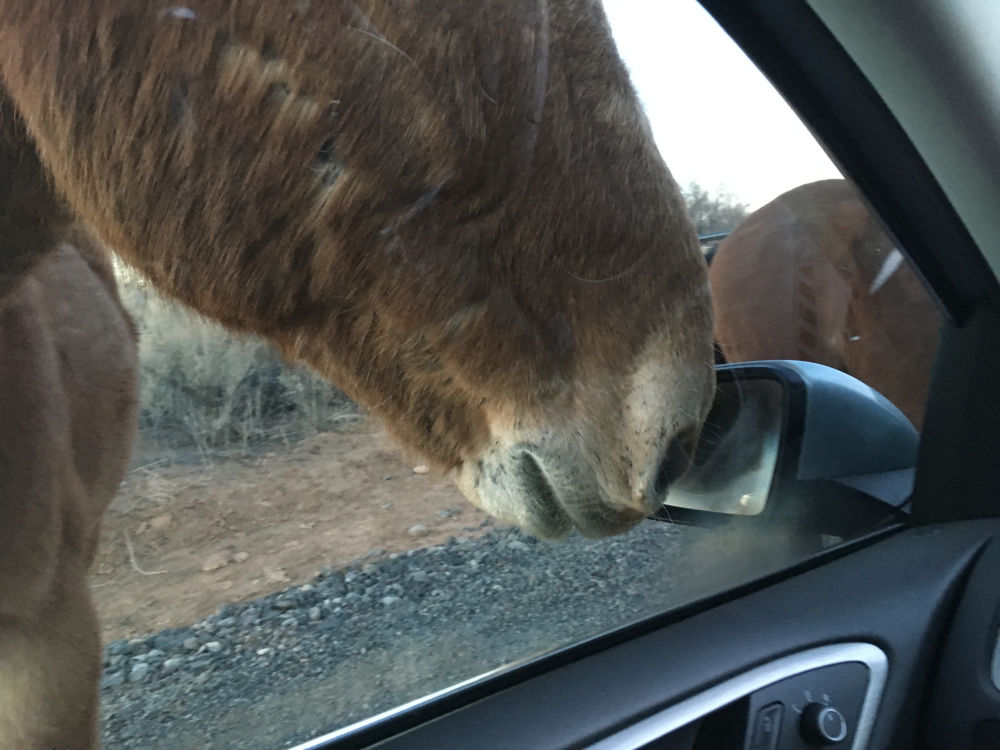 Apparently, Chief frequently calls Margaret in the early morning hours, on his antiquated flip top phone (refer to previous Chief blog) to discuss all sorts of topics, from humans to politics. On one call, an astounded Chief asked Margaret what she thought about a well-known Democratic presidential candidate being reprimanded for schnuffling the top of someone’s head. Margaret was the perfect human for him to ask, and they have discussed this topic in depth (thus the inception of this blog). Chief added that humans, in general, are confounding. He complained “his humans” call him a “horse”, when he is in fact, a mule. He snorts with indignation at the sign on our fence:

Signage that should say “equines”, not “horses”, is a sticking point for him. These issues, and more, he and Margaret discuss in detail.

As for their political discourses, one needs to know that Margaret is a staunchly conservative Republican. I am surprised that Chief has influenced her to (emotionally) cross the partisan aisle in favor of a schnuffling Democrat. Margaret will always vote representing her party, but Chief’s influential play upon her is powerful, and she respects his views.

Margaret keeps her confidences and rarely spills details of her conversations with Chief. But the discussions about our errant signage and schnuffling she shared with me, because she feels as strongly about these subjects as Chief does. The signage is pedantic stuff. However, the act of schnuffling has been tossed between them in multiple conversations. Schnuffling could lead to nipping, which is definitely not acceptable. But they both agree that demonizing schnuffling could cost us more than we could ever gain, and it puts out the message that we humans are unable to handle a relatively benign situation. Chief maintains the subject who does not want to be schnuffled, must clearly let him know, and he would immediately cease. He asserts his shamed Democrat friend would follow the same protocol. Chief declares he and his friend are both affectionate, uncomplicated chaps, and if we can’t handle the likes of them, we could get into treacherous waters with bonafide asses that are potentially dangerous and cleverly manipulative. 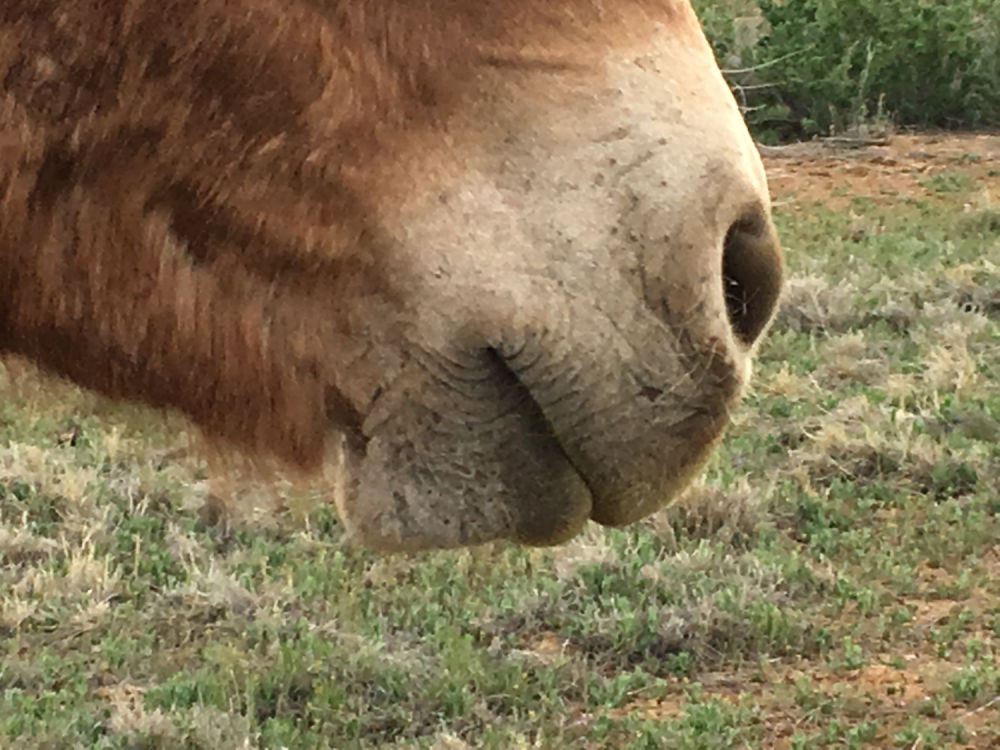 N.B. — “Ass” it is a proper zoological word for his mammalian type, but Chief uses this derogatory term in reference to humans ONLY.

I agree with Chief and Margaret; the act of schnuffling is usually sincere and heartfelt, but often unwanted. Margaret doesn’t mind green, sticky hair, but most humans would rather not.

Margaret, Chief, Paul and I (and a group of wing-nuts…neither left nor right) are planning a communal living center inclusive of the entire Animal Kingdom. It seems many humans are wanting to share life with species outside their own. If this resonates with you, please consider joining us. However, schnuffling will be de rigueur, because Chief is at the helm of this scheme. He is also in charge of the signage, which will be precise and succinct:

Chief requested I add this footnote, as he knows we tend towards myopic ethnocentricity concerning species outside our own. 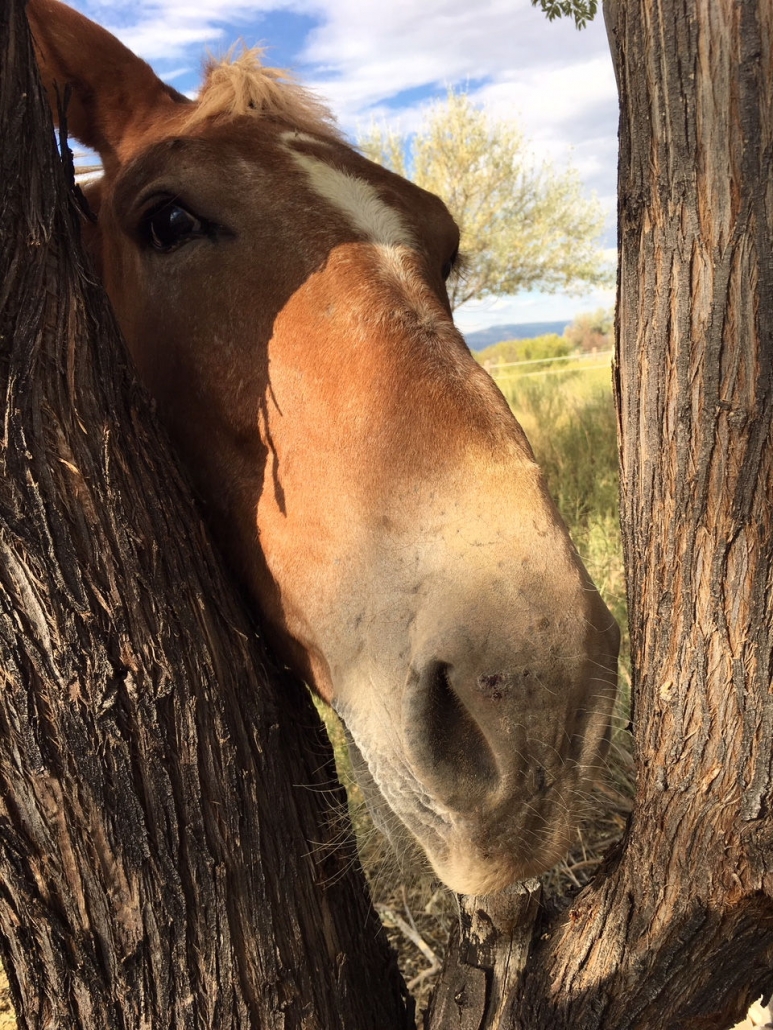